The Traditional Sweets of the Scottish Borders 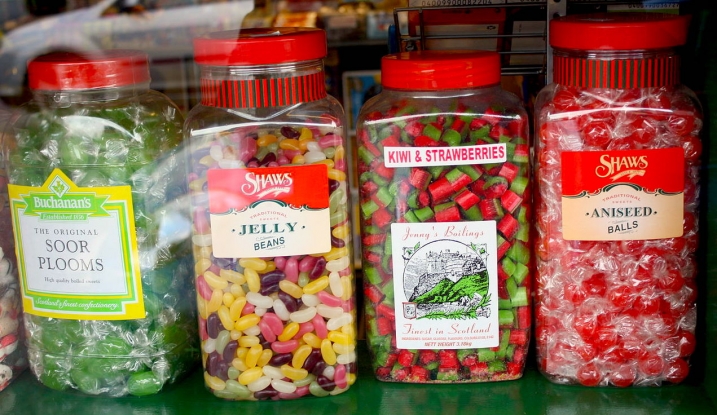 Soor plooms, Jethart snails, Hawick balls...the Scottish Borders is famous for its traditional (and sometimes quite eccentric) sweets. But where did they all come from?

It seems that confectionary really took off as a craft during the 1600s, when "sweetie wives" from the Borders would travel to Edinburgh to sell their wares. In fact, these five classic Caledonian candies are all associated with their own specific Borders town....

1. Soor Plooms
Translating as 'sour plums', these little green balls certainly aren't short of acidic kick. They originate from Galashiels, where 'soor plooms' is actually the town's motto and plums even feature in the coat of arms. But what is the connection between Galashiels and green plums, exactly?

Well, it all dates back to a local ruckus that took place in 1337. Legend has it that a raiding party of English soldiers snuck over the Scottish border and paused to scoff down the deliciously unripe plums that grew near Galashiels. Some locals spotted them and got into a fight, resulting in the deaths of the soldiers, who lay with the sour plums scattered all around them. It is said that the sweets were invented that same year to celebrate the victory.

It's certainly a very grisly origins tale for such an innocent wee sweetie...

Where to find them in Galashiels: Annie's Sweets or Mhor Sweets.

2. Jethart snails
Snail-shaped sweets? Well why not? Originating in the early 1800s, these tasty treats are still hand made in Jedburgh to this day (Jethart being the old name for the town).

Essentially, Jethart snails are brown toffee infused with peppermint before being twisted into the shape of a snail, then hard-boiled. The tale of where they came from is fascinating though. It is said that during the Napoleonic Wars, a French POW was locked up in Jethart jail. A local family, the Millars, showed him kindness and befriended him, so he shared the recipe for the sweets with them (his nationality probably explains the snail shape).

Where to find them in Jedburgh: Jedburgh Chocolate House or Jedburgh Sweets 'N' Treats Ltd. 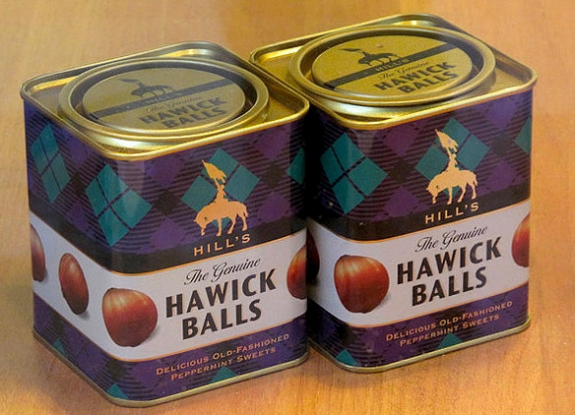 These deliciously buttery peppermints are crunchy on the outside but have a chewy softness on the inside — what more could you want from a 'sooky sweet'?

It's said that were made famous by Scottish TV rugby commentator, Bill McLaren. Born in Hawick, he carried a "poke" (small paper bag) of the town's traditional sweets with him wherever he went. Often he used them as a friendly conversation starter or as a way of drawing out rugby gossip from people.

The rumour is that Hawick Balls were invented in the 1850s by "sweetie wives" Jessie McVittie and Aggie Lamb, but their exact recipe remains a secret to this day. The sweets are now made by Scottish confectioner Golden Casket which, amazingly, has been around since the 1700s.

Where to find them in Hawick: Kat's Corner Chop and Cat's Candy Corner.

4. Moffat toffees
Despite the name, Moffat toffees are actually a hard-boiled sweet. They are known for their caramel-flavoured shell and the tangy surprise of their lemon centre.

They are believed to have originated in a sweet shop called Mrs Blacklock's which opened in Moffat over 125 years ago. The sweets were handmade by Janet Cook Johnstone, who used an old family recipe. Janet's great-grandson, Blair Blacklock, still runs the family business on the original site and has renamed it Moffat Toffee Shop.

Nowadays the store crafts over 20 different homemade confections, including chocolate nut brittle, ginger tablet and whisky fudge. Go in for a nosy and you'll feel, well, like a kid in a sweet shop.

Where to find them in Moffat: Moffat Toffee Shop. 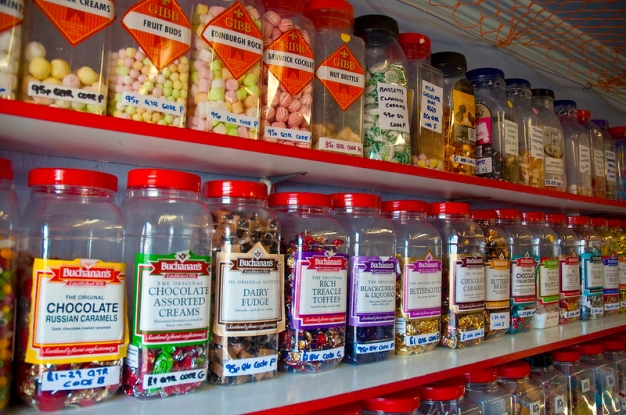 5. Coulter's Candy
This distinctive aniseed flavoured toffee was invented in the 1870s by weaver Robert Coultart, who lived in Melrose.

An enterprising chap, he would sell his Coulter's Candy around fairs and markets while wearing a feathered bonnet. To attracts children, he would play a whistle and sing a song about the sweets. In fact, you might have heard it from your Scottish granny or grandpa...

Where to find them in Melrose: Simply Delicious.

Planning to visit these Scottish Borders towns and sample their famous sweeties? Then why not stay in one of our comfy self-catering lodges in Oxton?